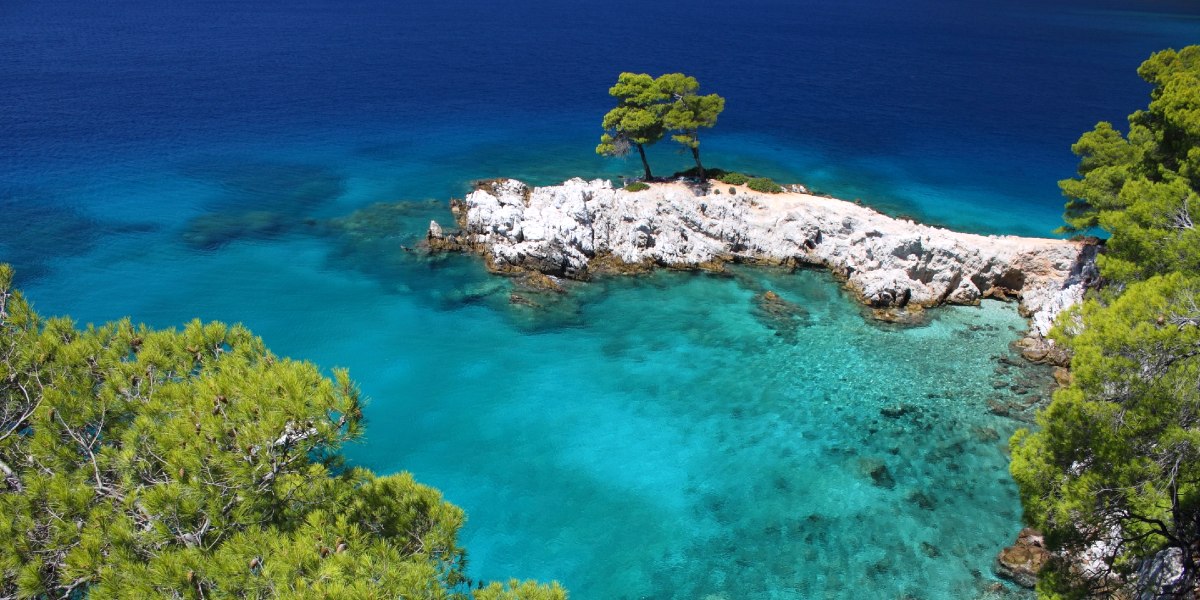 Enjoy nature in all its splendour!

Blessed with rugged natural landscapes, and surrounded by small islands scattered around the archipelagos, Alonnisos is an island ideal for those you want to unwind and enjoy leisure walks surrounded by pine forests, olive groves and orchards. The island is the most remote of the Northern Sporades island group, and home to the National Marine Park of Northern Sporades, a refuge for rare seabirds, dolphins and the Mediterranean monk seal, monachus monachus.

inhabited, as indicated by Neolithic settlement remnants found at

Upon reaching the island you will encounter Patitiri, the picturesque harbour and capital of the island with the beautiful stone paved waterfront that took its name from the wine presses used by the locals, who were mainly occupied with wine making. Chora is the old capital of the island. A medieval castle offering sweeping views to the sea, stone houses with picture-perfect courtyards, narrow paved streets and a number of churches encapsulates the essence of a typical Greek island village. A trail from Chora leads to the church of Agioi Anargyroi, where you can enjoy a lovely walk in the dense pine forest.

At Milia, in a green idyllic location, you will find the International Academy of Homeopathy, which still keeps alive the deep-rooted and cherished tradition of folk medicine thanks to the miraculous herbs that grow on the island. Sea lovers will also find on Alonnisos beautiful beaches with crystal-clear waters (Megalos Mourtias, Steni Vala, Milia, Chrisi Milia, Marpounta) that promise to offer you unforgettable moments of peace and serenity.

Spend a day on a boat trip and explore the uninhabited islets around the National Park:

Enjoy the laid-back atmosphere of this serene island and mingle with the locals, who preserve with passion their customs and traditions. Throughout the summer, participate in all the festivities on offer, such as the traditional wedding on 15th August, or the harvest re-enactment in July. Savour pure, local specialties: cheese pie, grilled figs with honey, kakavia (fish soup) and walnut pie.

And don’t forget to buy some “fouskakia” (traditional donuts), “hamalia” (triangle shaped phyllo crust sweets filled with a mixture of ground almonds, honey, cinnamon, and nutmeg) and mouth watering “amygdalota” (almond sweet) to offer to your beloved ones back home!

The very first habitant of “Ikos” (as the island was named in antiquity) was Stafylos (meaning grape), the son of Dionysus and Ariadne. The myth demonstrates the island’s strong bonds with viticulture from ancient times until today. In antiquity, urns were stamped with the word “IKION” and exported all around the ancient world, corroborating the fact that the island was an excellent wine-producing region.

According to the myth, Pileas, the father of Achilles, was buried on Alonnisos Island. This is the reason why the island’s second name is “Achilliodromia”. Different versions of this name have survived throughout the years: “Hiliodromia”, “Liadromia”, “Diadromia”.

Alonnisos was one of the first Islands of the Aegean to be inhabited, as indicated by Neolithic settlement remnants found at the Cape of Kokkinokastro (meaning “Red Castle”). On Gioura Island human presence was first detected in the 9th century BC, according to findings at Cyclop’s cave.

Located at the crossroads of major sea routes, it was from here that Argo, the ship on which Jason and the Argonauts sailed to Kolhida to retrieve the Golden Fleece and the ships of Achaeans sailed to Troy. Numerous shipwrecks of classic and Byzantine times lying on the sea bottom confirm the naval power of the island through the years. Travellers, like Buodelmondio back in 1420, had noted that the inhabitants were so experienced sailors that they used to guide their ships with the help of various signs.

Sailways Offers the best Bareboat Yacht Charter in Greece. Book a Yacht in a few clicks!