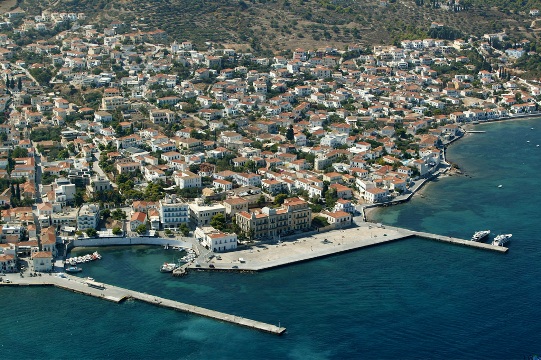 Spetses, an island boasting a long naval tradition, is famous for its significant contribution to the 1821 War of Independence. It was here that the revolution flag was raised on 3rd April 1821. The island has managed to retain its individual traditional character thanks to its well-preserved grand captain mansions, still bearing eloquent witness to the island’s glorious past. The picturesque old harbour and Dápia, a tourist and commercial centre where the heart of the island’s entertainment beats, are the trademarks of the town of Spetses.

Take a romantic trip around the island in horse-drawn carriages and admire the grand mansions adorning the narrow cobbled streets of the island. You can visit Spetses during September, when “Armata”, a truly impressive re-enactment of a naval battle takes place ever since 1931. If you are a sports lover, you definitely don’t want to miss the unique athletic events organised every year in April “Spetsathlon” and October “Spetses Mini Marathon”, where thousands of participants take place. Spetsathlon, the biggest triathlon in Greece, receives athletes from every corner of Greece and the world who enjoy the Swimming, Biking and Running races. On the other hand, Spetses Mini Marathon gathers athletes and visitors that enjoy running and swimming races for the young at heart!

Sightseeing on the Island

The rich history and naval tradition of the island is reflected on numerous sites that are definitely worth visiting:

• The House of Bouboulina

Built around the end of the 17th Century, the building is shaped like a Π, a detail which at that time indicated the importance of the owner. Bouboulina was a heroine that played a significant role in the 1821 War of Independence. Visit her house, which now operates as a museum to admire its wood-carved Florentine ceiling, 18th and 19th century furniture, interesting collection of old weapons, fine porcelain and rare books.

Today the house hosts a museum exhibiting relics from the War of Independence, letters written by war heroes like Kolokotronis and Athanasios Diakos, a folk art collection and the relics of Bouboulina. The house was built between 1795 and 1798, and was donated to the Greek state in 1938 by the heirs of the Mexis family. The objects on display represent more than 4,000 years of the island’s history.

This rural church was built between 1824 and 1830 to honour the victory of the Greek warriors against the Ottoman fleet.

The island’s Cathedral is of great historical importance as it was here where the island’s Independence flag was raised on 3rd April 1821. It was also here where the dead body of Paul Bonaparte, nephew of Napoleon Bonaparte who came to Greece to fight on the side of Greeks, was kept in a barrel of rum for three whole years!

Other sites worth a visit are: the War Memorial of the Spetses Navy, the Clock in Rologioú Square, and the Anargyreios Korgialeneios School. Situated in the area of Kounoupitsa, today it houses the Centre of Environmental Education.

Head to the island’s sun-drenched beaches and swim in blue waters with a beautiful pine-forest as backdrop:

• Ayioi Anargyroi: One of the largest beaches on the southwest of the island with clean and deep waters. It offers also water sport facilities.
• Ayia Paraskevi: A sandy beach situated on the west part of the island, 12 km away from Dápia. It took its name from the near-by chapel of Ayia Paraskevi. Water sport facilities are also available.
• Ayia Marina: 2 km south-east of Dapia, this is the most famous beach of the island! Sandy, organized with many beach bars, and restaurants. Sun lovers as well as water sport funs arrive here either by boat or by bus.
• Xylokériza: A secluded beach 8 km from Dapia, on the south-eastern part of the island, mainly accessible by boat.
• Vréllos: A beautiful sandy beach on the west part of the island. Surrounded by a dense pine forest, it’s no wonder it is called “Paradise”. The beach is also an ideal starting point for following a beautiful walking route towards Profitis Elias, the highest spot of the island.
• Zogeriá: With pine trees that stretch down to the beach and azure waters, the locals consider it the most beautiful beach on the island. Weather permitting, you can enjoy a breathtaking view all the way to Nafplio!