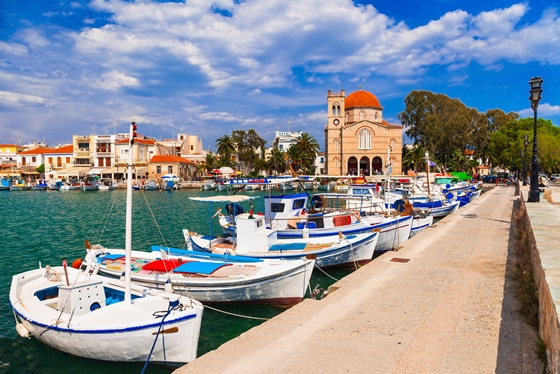 Discovering Aegina. The island of Aegina is one of the most popular tourist destinations as it is the closest island to Athens (only 16.5 nautical miles from the port of Piraeus).

According to the myth, the island took its name from a nymph, daughter of the river god Asopos, whom Zeus fell in love with and took with him to the island! From 11/1/1827 until 3/10/1829 Aegina town was the temporary capital of the newly founded Greek state. It was during that period when Governor Ioannis Kapodistrias had impressive neoclassical mansions built to house his headquarters that today are important tourist attractions.

Eventhough the island of Aegina small, it boasts a great number of sights and natural beauties, highlight of which is the famous Aphea Temple. It forms in fact an equilateral triangle with the Parthenon and the Temple of Poseidon at Sounion, the so-called “holy triangle” of the antiquity.

Aegina town, the capital of the island, stands out for its well-preserved buildings. On the outskirts you can find charming little villages with distinctive traditional character, such as Kypseli, Agii and Vagia as well as organized tourist resorts like Agia Marina, Perdika, and Souvala. Aègina is also surrounded by many smaller islands (Moni, Metopi, Diaportia, Lagouses, Kyra, Dorousa, Spalathonisi, Anonyma) that can be reached by boat from the port of Aegina.

During your stay on the island, you can visit the following museums and sightseeings:

In the town of Aegina also call in at:

The Temple of Aphea Athena

Close to Ayia Marina lies the 500 BC Doric Temple of Aphea Athena, the most important monument on the island. The temple was founded there ai it formed an equilateral triangle with the Parthenon and the Temple of Poseidon at Sounion, the so-called “holy triangle” of antiquity. The most impressive part of the temple is its wonderful sculpted pediments, a large part of which is exhibited at the Glyptothek of Munich. Excavation findings are on display at the Archaeological Museum of Aegina.

Located at a short distance from the harbour, the area took its name from a standing column (of Doric type), the only one remaining from a 6th Century BC temple. Mount Kolonas was a religious centre of the ancient town. Archaeological research has revealed the presence of more than ten historical buildings dating from the most recent Neolithic era (5th millennium BC) to the Mycenaean period (1600- 1200 BC). In front of the archaeological site lies a museum bearing the same name.

The site of Paleohóra represents Aegina during Byzantine times. This site is known as the “Island Mystras” because it once had 565 churches, 28 out of which (with exceptional wall paintings) have withstood the ravages of time, just like the ruins of a medieval castle and two incredible monasteries.

Near Palaiochora, on the road to Souvala, lies the impressive Monastery of Ayios Nektarios, one of the largest monasteries in the Balkans. It was built in the 20th Century (between 1904 and 1910) on the site of a small Byzantine monastery.

Sun-loving tourists should definitely soak up the sun in the island’s crystalline beaches: